I left Château de Chambord around 1:00 pm, 40′ later I reached the other castle, also famous in this “Vallée  de la Loire” – Château de Chenonceau. The architecture of this castle didn’t impress me very much when I first saw it in the internet compared to the Chambord, but when I saw it in reality – just “wow”!

Château de Chenonceau – the eastern facade of the castle over the river Cher.

Unlikely the Chambord where we can admire the castle upon arrival, as it’s very visible from the parking lot, the Chenonceau – I need to walk along a beautiful road, surrounded by the old trees on both sides for at least 10′ to see the château with the main entrance, it’s a bit “humble”, but wait…until I turn left to the beautiful garden and witness another facade, the eastern, of the château and now the beauty of this over-500-years old architecture, right in front of me!

The main entrance – the Chenonceau didn’t look that impressive…

the other part of the long road leading to the main entrance of Château de Chenonceau.

The famous eastern facade – the 2-floor hallway on the bridge, over river Cher at low tide.

The castle has another name  “Le château des Dames” (the castle of the Ladies) as this castle and its gardens have been developed, enhanced by several famous Ladies of the High Society since 16th century. We have the Catherine’s garden – created by Cathérine de Medicis (Queen of France from 1547 to 1559) or Diane’s garden created by Diane de Poitiers (a powerful noblewoman, prominent courtier at the courts of French Kings – France I and Henri II).

Diane de Poitiers was the one who built the famous bridge over the river Cher and then later Catherine de Medicis raised the height of the 2-floor hallway for the glorious parties upon the bridge that has been built earlier by Diane de Poitiers. 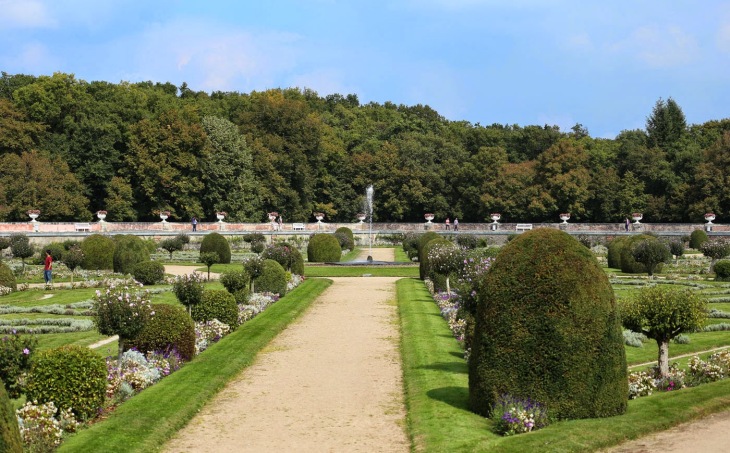 The Diane’s garden with the water fountain in the centre. 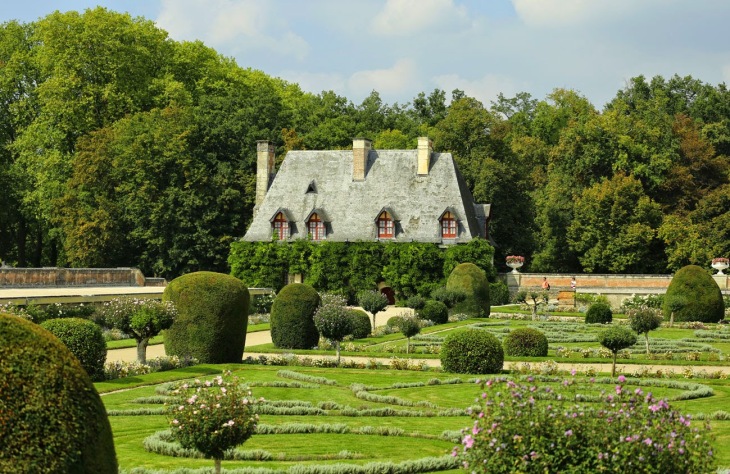 Diane de Poitiers was the the King Henri II’s favourite Lady, she was renowned for her beauty, intelligence and sense of business. Henri II gave her the Chenonceau in 1547, and she created the garden  in the above photo and it was one of the most spectacular, modern at that time.

The Catherine’s garden – on the west side of the Chenonceau. 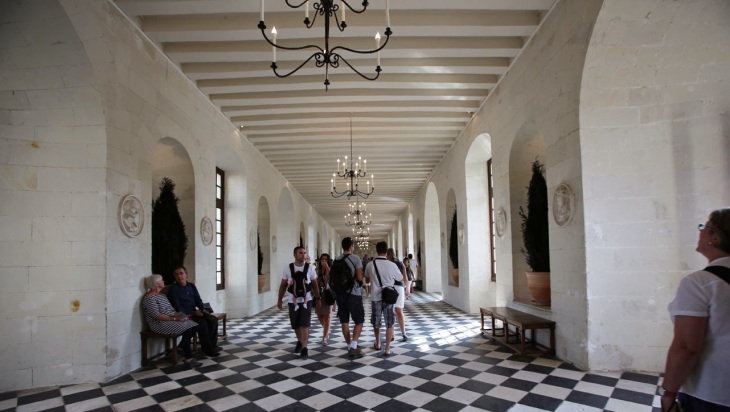 I much prefer the Chenonceau than the Chambord. No extremely immense park, no spectacular facade or majestic rooftops, but Chenonceau seems, to me, more “exotic”, especially when I was facing the eastern facade and walked along the hallway inside the château, decorated with the high windows open on both sides to the river Cher below, it made the hallway full of the light and very cool due to the fresh breeze from the river Cher.

It wasn’t crowded in the afternoon and I didn’t have time to stay longer in this château, I was able to pass by some rooms, then went down to the kitchen for a quick look and in hurry to check out the park outside. 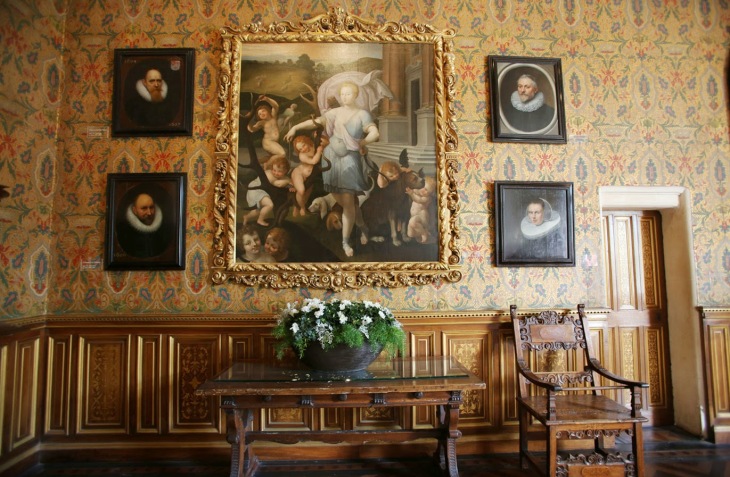 Another room with the portraits 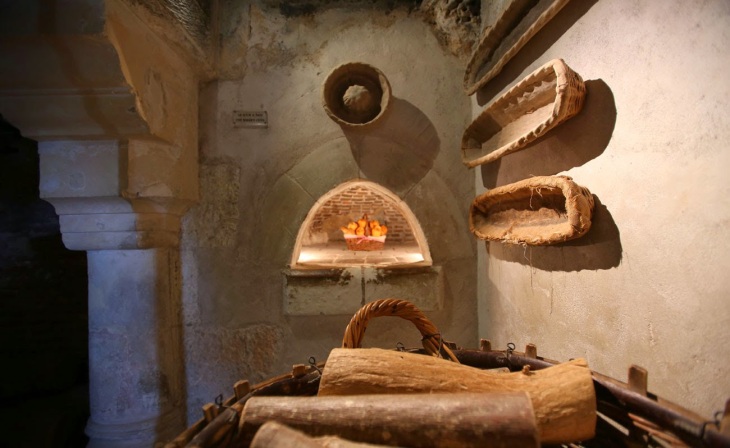 The bread oven in the low floor – one corner of the kitchen for château’s employees.

one of the green alleys in Chenonceau… 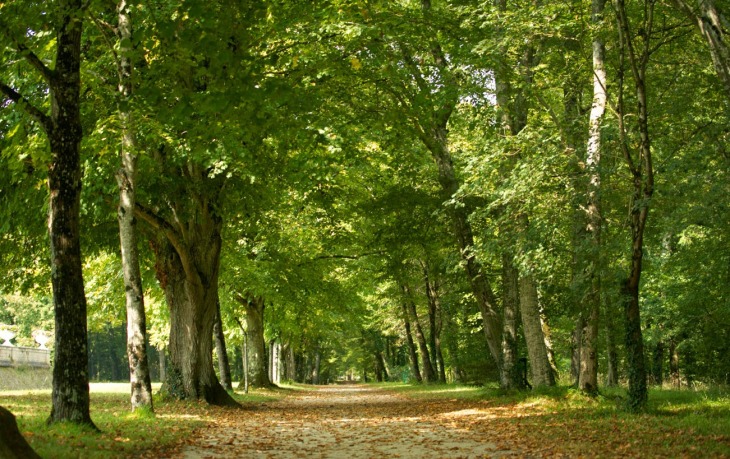 and another one – still in green in September – no sign of the Autumn yet.

I took a short rest here next to the Maze and also tried to get in, it took me some time to get out, sometime I need to watch the guide from other visitors and sometime stuck in the dead-end. It’s a simple Maze but could cause a trouble without guide from the outside!

The main road leading to the Chenonceau, the view from the Château.

another alley along the canal, near to the exit.

I didn’t want to keep my companion – a funny and quite talkative driver, waiting, so I hurried back to the car and we both went back to Blois around 5:00 pm. Six hours to visit the most famous castles in Vallée de la Loire was not enough for me to explore, I was either too busy with my camera or struggling with the summer heat but I felt happy as I finished my plan.

I will definitely come back to Blois whenever I have a chance, it’s not far from Paris, 2 hours by train, so will see you soooooon – Blois and the famous châteaux in the Valley of Loire River. My next review will be the second part of this post – a very sportive weekend in Blois and the beautiful evening light show at Château de Blois.