Today I’m sharing not only a cake, a great sweet but also a sad memory about one of my cousins, chị Ký, i.e sister Ký in Vietnamese. She’s much older than me, she passed away long time ago. Anyway let’s talk little bit about the cake first and why it’s related to my late cousin.

I don’t know how to make these little colorful cakes, I’m not sure I will do it in the future or not, maybe not, because it requires not only a pastry skill but also a beautiful artist expertise – both sculptor and painter. To make a good green bean paste – not a big task but how to make it perfectly, not dry, not wet, super smooth, super tasty…and perfectly shape and color it like real fruits. Not easy at all! 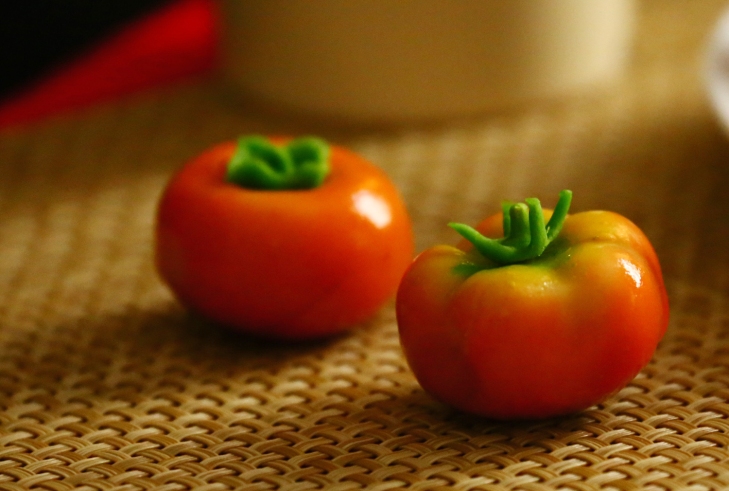 I have no idea when people make these lovely colorful cakes? for any special occasion? For Lunar New Year? For wedding? I don’t know, I was just a little boy when I first tasted it. And it has been created by chị Ký, my late cousin. I called her “chị Ký”, but her real name was “Hồng”, it means either “Rose” or “Pink”. No one called her by that beautiful name, like it was not deservedly for her!

When I was just 5 or 6 year old, chị Ký took me to a big villa of some high ranking army officer in Saigon. She was a beauty at that time and probably an expensive “mistress” ( I knew about that much later!). She left me with a can of Coke in a big living room, high ceiling with luxurious chandeliers which brightened the space with flashy light, high windows with white chiffon curtains. How long I was there, waiting for chị Ký, I was too young to wonder what happened with her and that officer upstairs!

My memory about chị Ký like wrong puzzle pieces, different pictures at different times, not related to each others. In my memory she was talkative, not very tidy, even messy, she, seemingly, never care to look after herself. All her talks were like junk. untrusted stories, craps.

And one of those – one day she took a young teenager girl, from somewhere, mixed of African-Asian blood, to my parent  house, asked my mom to adopt the girl because chị Ký strongly believed that teenager was a daughter of President Bokassa of Central Africa, who was looking for his long lost daughter in Saigon, back to 1970s. To her, my mom could made a fortune by telling the King “Yes, I have your daughter”! Oh dear!

To be honest, I’m not sure how chị Ký was related to my mom, but my mom always tried to support chị Ký one time after another. She gave chị Ký money. Money gone. She gave chị Ký some clothes. Clothes also gone. My mom even bought some equipments for chị Ký to help her to “start-up”, and everything quickly gone within a month! Such a loser, my mom said!

But chị Ký was the one who made my first green bean cakes…I still remember she oiled her hands to easily shape the paste into beautiful fruits …but I complained because it was oily, I hated the oil flavor. It seemed upset chị Ký ! I feel so sorry for that!

The last memory about chị Ký…

During the turbulent times in Saigon, chị Ký, suddenly as always, appeared at our doorstep  with a lot of food cans, food bags that she surely stole from the US army warehouse during the chaos…she brought for my family. Later every time chị Ký stopped by, she dressed poorer, her shirts more worn, strongly smell, her voice was deeper, her thick, black hair now became more pepper-and-salt. I noticed her tiring eyes…I couldn’t find again the image of her beauty of the old days.

She reminded me of the image of a scary witch from fairy tale. I was look down on my cousin. Time flies, I already forgot when I met chị Ký for the last time, until one day, after my long years study overseas, I was told chị Ký spent her last days in the hospital without anyone nearby, lonely passed away in pain. Few people in the family knew about it. Her image is gradually fading away in our mind, but strangely every time I see these small colorful little green bean cakes…I miss her, my late chị Ký, a woman with a strange life, full of ups-and-downs, freely lived…with a loneliness till her last  days.

I recently found we can order these cakes on Facebook and if you wanna try to make it, check this video!