My first time in Ha Long Bay was sometime between 1993-1994 and it was just one-night stay for business. I accompanied an Australian crew for TVC shooting around Vietnam for my company – Samsung Electronics. Ha Long was the second film location after Hanoi. The film director, by his words, used to be a friend of Nicole Kidman and some other celebs, wanted to capture the sunrise at the Bay, so his request to everyone – be ready by 4:00 am, but the next scene was more memorable – it was shot in the fish market, next to the fishing village, with a very nice view to the Bay.

It was wet, windy, fishy smell, muddy, dirty, big noisy crowd…and the talent, a Beauty Queen of Vietnam was asked to dress always in pure white áo dài that her mom had to wash, dry everyday after the shooting. That TVC was recognised one of the most beautiful TVCs at that time on air, as we could see most beautiful sceneries in Vietnam, from North down to Mekong Delta in 45 seconds!

We arrived to Ha Long late at night, one friend of mine booked a room at Saigon Ha Long Hotel, our room had almost no view but next morning when we went up to 14th floor for breakfast at the Panorama Restaurant. I was amazingly impressed with the view to the Bay. The panorama shot would be an awesome picture but it was very cloudy. 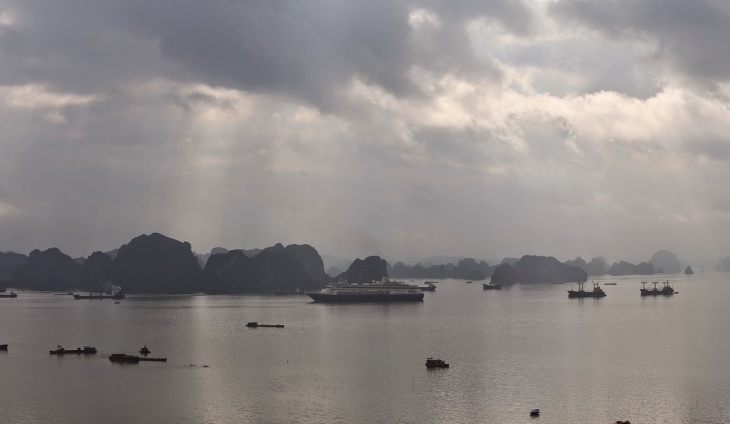 After breakfast we bought tickets: one for the boat, 150.000 VND and another one, like the entrance fee (!), 120.000 VND. The tour last about three and half hours, just around the core area with one or two stop-overs for visiting the cave.

Ha Long Bay has an area of over 1500 km2 and 1969 islets in various sizes and shapes. Some of the islets have hollows or caves inside. Most of them are limestone and the formation of these islets probably occurred 500 millions years ago! I was told that the special tour could be designed for those who love to explore more the Bay. The boat would take a bit further in the Bay. Our tour was just a basic one, so I didn’t have a chance to explore more this beautiful site. 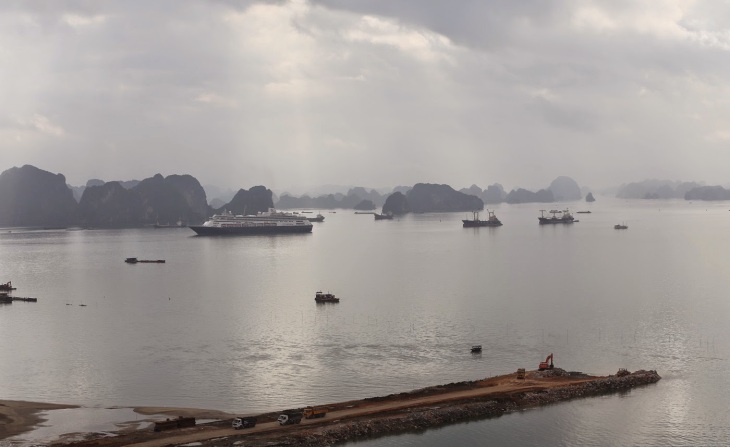 As we were still very tired from the Yên Tử climbing yesterday, so we decide just to go for the 3 and ½ hours, it should be good enough for three of us. On the boat we met some guests who stayed at the luxury cruise American Line, they were cruising from Singapore to Thailand, Vietnam and Hong Kong within 14 days. We curiously asked about the price, it was some lovely 1,400 USD per person. 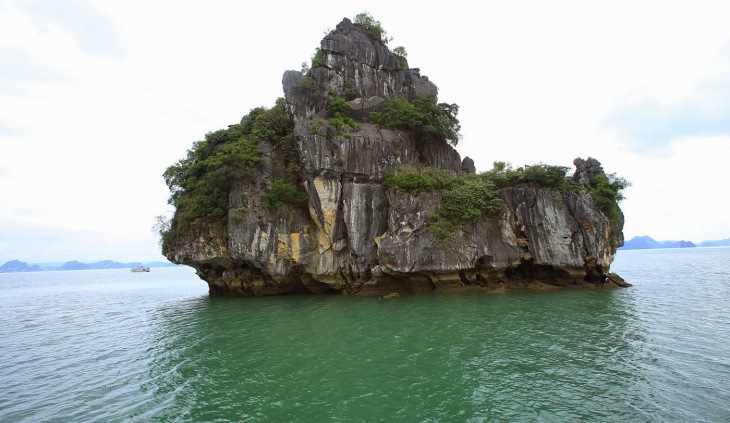 This islet should have some name…that I don’t know!

Talking about Ha Long Bay I suddenly remember the story with the vote for “The New 7 Wonders” and Ha Long Bay was one of the finalists for the newly selected 7 Wonders of Nature. What we remember most from this campaign in Vietnam was not about the Bay or the criteria but about the funny rumours around the scandalous actress-business woman, who has been assigned by the Ministry of Tourism of Vietnam as the Tourist Ambassador. So far Vietnam authorities are not doing good enough to develop the tourism in Vietnam. Poor management. Poor ideas and a lot of other issues like overpricing, service quality or lack of coordination. Hope for the best!

and this one, too….should have some name!

It was not a very busy morning, all boats heading to the stop-over

Another thing I missed in the Bay was the beautiful boat with the red sails, now I didn’t see it anymore in Hạ Long. I was wondering where are they, those traditional boats with two big red sails.

The stop-over to visit a cave in the Bay.

The ride was a short one, less than 30′, the cave was not that impressive

on the way back to the big ship 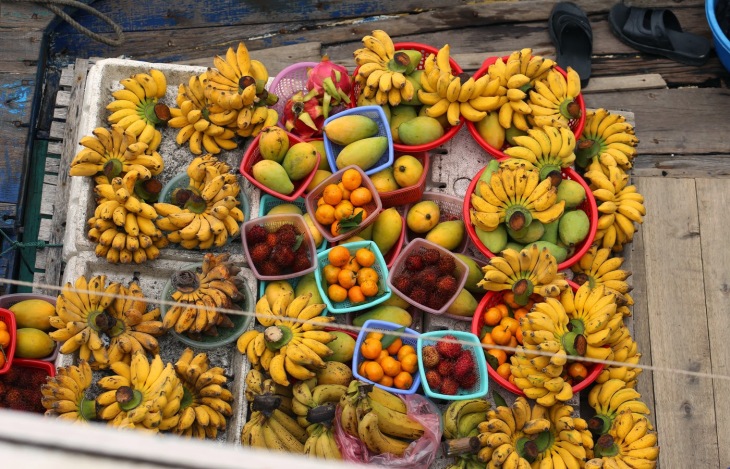 Everything in the Bay was quite overpriced, we got three coconuts, some cooked corns but both were bad, coconut juice almost tasteless, the corn was hard and cold…During our ride there was a small boat with fruits approaching our ship, I was on the roof so I didn’t ask how much the bunch of bananas but it seemed not cheap!

Instead of the boat with red sails, I finally caught a small fishing boat alone… 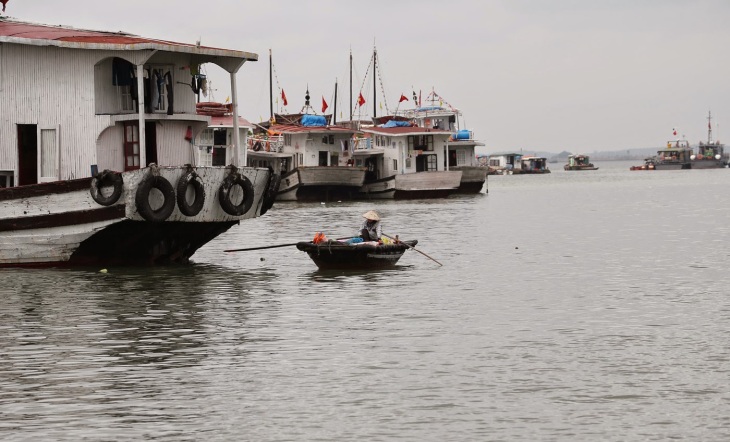 Back to the Quay

Three hours in the Bay was very fast. We were lucky with the weather during the ride, not very strong sun, loverly fresh breeze from the ocean…and surrounded by the beauty of the Bay, I was thrilled with my second morning in the journey to the North, especially after my unexpectedly terrible experience in mountain climb the day before.

Hạ Long dramatically changed. The image in my memory when I was here in 90s was totally disappeared, when seeing a big and beautiful boulevard led to our hotel and many luxury hotels along the Bay. The old fish market of the old days next to Bay before probably has gone for long, and I didn’t have a chance to visit the city, three hours in the Bay and time to get back to Hà Nội.