After spending almost a whole morning at Mercato Centrale, the rest of my day was wandering around another “wonder” in Florence: The Cathedral of St Mary of the Flower (Duomo or Santa Maria del Fiore). Without map I can easily find where is it, what I need to do – just follow the crowds and it took me directly to the Piazza del Duomo, where I witnessed the incredible beauty of three Renaissance architectures: the Duomo, the Florence Baptistery and Giotto’s Campanile. The Duomo by Filippo Brunelleschi and its famous dome in egg-shaped, it was made without scaffolding. The raising of this dome, the largest in the world in its time, was no easy architectural feat.

Florence and Rome are  my last two stops in my journey around France and Italy. Days after days, trains after trains, hotels after hotels and I still kept wandering without stop around the old towns, villages, carrying my damn heavy camera bag with lenses…I feel already tired but whenever I sat down for rest, I couldn’t sit for long, I feet I need to carry on with my walk.

The Duomo – in order to replace an old and small church and especially when seeing other greater buildings like Pisa Tower or  another Cathedral in Siena, also in Tuscany, the City council of Florence approved the design of the new church in 1294 but they probably never expected that it took nearly 140 years to finish the construction of this Cathedral.

In 1436, this Cathedral was consecrated by Pope Eugene IV and it was the first “octagon” Cathedral’s Dome which has been built in history without the wooden supporting frames. It was one of the most impressive projects of the Renaissance, until now the mystery behind the construction of the double dome without supporting frame – remained a big and headache question for today historians, architects.

At first I thought this long queue for the church but actually to climb up to the dome. That’s the only way to see the inside of the dome up close and enjoy the extraordinary view of Florence  is to climb its 463 steps.

The way up and down are basically tight corridors used by the workmen who built the cathedral for maintenance. They are narrow, the steps can be steep and the entire climb is 463 steps.

The second building, right in front of the Cathedral – the Florence Baptistery – one of the oldest buildings in the city, right in front of the Duomo. Built since 11th -12th centuries, famous for their bronze doors with relief sculptures. The outside of the building was under renovation, covered by canvas when I was there, but the inside was open to public. My first impression in this Baptistery was all the statues, paintings on ceiling…but what attract most attention of the crowd were the bronze doors from the outside.

I was patiently waiting for my turn to get closer to this bronze door, but it was almost impossible, always some big crowd of visitors blocking there. I had to wait later in the afternoon when less visitors, but I still failed to take a photo of the entire door because of the crowds.

The third building – Giotto’s campanile – the bell tower next to the Cathedral, 85 meters hight, in 5 levels. I was confused a bit whether I attempted to climb up this tower or to the top level of the Cathedral, but however I gave up after the first few steps – due to tiny staircase, like in the tunnel, packed of the visitors going up and down, I couldn’t catch my breath. Now I regretted not to see Florence from the top.

Here are some photos of the routine life around the Cathedral of Santa Maris del Fiore in September, not the high season, after hours wandering around the Cathedral, I decided to sit down here and there, sometime just in front of some shop’s window display, and to observe people around me, later on when the sunlight had faded, the light on the cathedral was on, I felt partly tired after a whole day out, partly nostalgic, homesick after almost a long-month travel…

I stayed in Florence only for one night. All my time was spent at the Market and the Cathedral, I realized  about another unique, old bridge with many shops built on its edges (Ponte Vecchio) over Amo river,later at night back to the hotel. 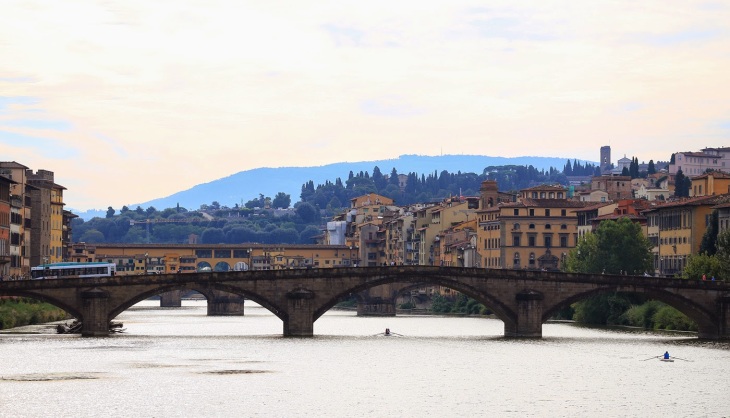 Next morning I was rushing to Ponte Vecchio but couldn’t reach closer to it as I need to hurry to the catch my train to Rome. I found this video from NatGeo about the big mystery behind the construction of the world’s greatest Cathedral’s Dome – The Duomo. It’s well worth to watch!