I took a train from Paris to Lucerne in a summer day, it takes nearly 5 hours, luckily I met a new friend, a painting artist from Florida and we kept sharing our travel stories, experiences along the road, so we didn’t notice these five long hours could fly so quickly! We have different destinations, later we keep in touch on Facebook, continued our conversations, our stories…

I arrived to Lucerne in early afternoon, the train station right in the center, it took me just about 20 minutes to walk to my boutique hotel, right next to the river with the famous wooden Chapel bridge.

The wooden bridge is the oldest covered bridge in Europe and the oldest surviving truss bridge in the world, with a medieval stone tower by its side – The water Tower.

I heard that many visitors feel this Water Tower has been haunted, this maybe because it served as a dungeon in medieval times and must have witnessed the suffering and torture of innumerable inmates, not to mention bloody deaths? We don’t know but at the sunset – the water tower looks quite mysterious!

In Lucerne, I decided to take a ship to explore the scenery along the lake. I quickly book my departure time after selecting the itinerary. It’s totally free with my rail pass. It was a beautiful summer day, I may expect a lot of winds, sitting on the upper open terrace, but in return I could enjoy the picturesque panorama.

In 1577 people discovered a giant human skeleton, measuring an unbelievable 6 meters, in the hollow of an uprooted oak tree, but however it has never been on display and no any explanation.

Switzerland’s rural building styles are as diverse as the many regional dialects of its four national languages. Up to the northern Alps building mostly with timber, and those in the south – mainly stone. In central Switzerland, like in Lucern, use a mix of both materials. It reminds me the color of the roofs in France – from grey in the North to red in the South. 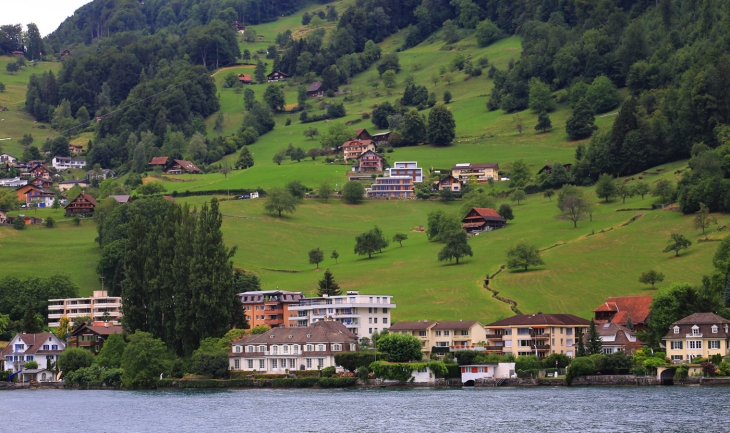 I came back to town in late afternoon, quickly have a lunch near to the hotel and enjoy my walk around the old and new town, especially the covered bridge and another bridge nearby.

I spent a night to walk around the old town, to my surprise it was not very crowded, maybe not the right time ? I’m leaving Lucerne the next day for another mountain town Rougemont, it will be a long ride on the train, the scenery along the rise up was fantastic and has been nominated one of the most beautiful Swiss train rides!

Good bye Lucerne! I hope to come back to Lucerne someday to discover more the city, the green land, the peaceful life by the lake and maybe I will have a chance to see a dragon with healing powers living on the Pilatus as it was stated in a chronicle from 1619  “I was contemplating the serene sky by night, I saw a very bright dragon with flapping wings go from a cave in a great rock in the mount called Pilatus toward another cave, known as Flue, on the opposite side of the lake’.