In my trip to North Europe – Sweden is the only country where I spent most of my time – nearly 5 days in Abisko for my Northern Light adventure and more than a week in Stockholm. It seems that I’m unfair to another cities like Copenhagen, Oslo or even Helsinki, where I has been probably 16 years ago, but I do like Stockholm. Or maybe I didn’t have enough time to discover the hidden charms of the other cities. Next time then!

Back to Stockholm, I have a lot of time, I got my pass and tried to go where I like the most – from the popular Ikea showroom (!) to the abandoned graffiti forest or from one metro station to another one that amazed me greatly, despite the fact that I used to live in St Petersburg where is definitely famous for their underground stations.

The morning when I decided to go to Vasa Museum was typical cold, gray of November, from metro station Karlaplan then another walk for about 15 minutes or take a bus No 67 to stop Vasamuseet. I was actually took a wrong way at first until I asked for a correct direction to the Vasa!

I came very early, still quite empty at the entrance, except a small group of Chinese tourists and some other visitors! Good! From the outside the museum didn’t impress me much, but getting inside – the vast space, the light, the air… made the atmosphere very dramatic, I was really impressed when seeing the Vasa ship right in front of me!

By the order of Gustav II Adolf – the King of Sweden at that time – the warship has been built in the ship yard, not far from Stockholm. Over 300 people were working at the shipyard, mostly Swedish and Finns but some were immigrants from Denmark or Baltic countries, even from Netherlands, Germany. This created a challenging working environment, people spoke different languages, trained in different shipbuilding traditions, and perhaps most confusingly, used two different systems of measurement.

10 August 1628 was a Sunday, the quay was packed with people, VIPs, workers from the shipyard with families, all loved to witness the ship’s maiden voyage. The warship was freed from the land, four of the ten sails were set, and a salute was fired. There was a little wind in that fateful morning, not strong enough to pull the sails but enough…to sink the largest war ship just within minutes. The water poured in through the open gun ports on the lower gun deck and after just a few minutes – the ship was on the sea bed at a depth of 32 metres and for over 300 years, right in Stockholm harbor.

According to some experts, the upper-works of the hull are too tall and heavily built for the relatively small amount of hull below the waterline. This might have made the ship fast, but it put the centre of gravity too far above the water, so even a light breeze could heel the ship alarmingly.

The designer, Henrik Hybertsson, was an experienced and well-respected master shipwright who had built a number of successful warships for the Swedish Crown, but Vasa was something new for him in its size and armament. I was told after the catastrophe no one has been blamed guilty as the final design was approved by the King. Anyway as concluded the ship did not have enough “belly” to carry the high and heavy upper-works!

In the early 1950s, Anders Franzén, a fuel engineer  and amateur archaeologist, started searching for the lost ship of the Swedish navy, it took him few years to confirm the exact location of Vasa. And 24 April 1961, thousands of people crowded the shores around Stockholm harbor and the Swedish Television broadcast live to all of Europe to share with the world how the Vasa comes back from the dead, after 333 years in the dark water. 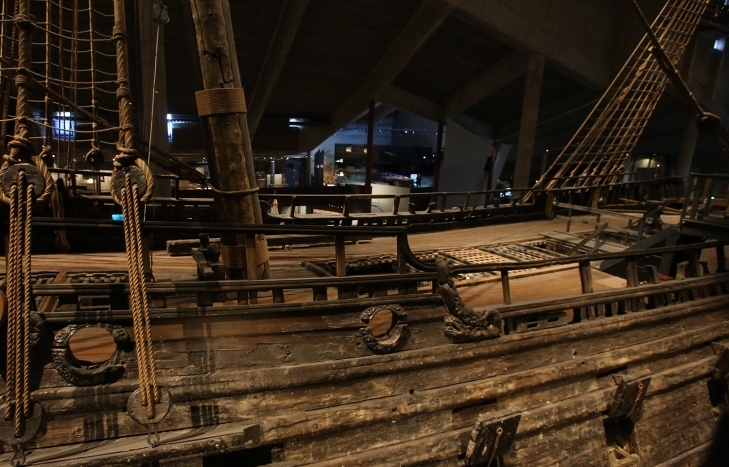 The replacement parts have not been treated or painted and are therefore clearly visible against the original material that has been darkened after three centuries under water and I was told 98% are original, only 2% new – you can see 2% new in the above photo.

It took another few years, till 1967, to proceed all excavation works, to find the lost objects which fell off over the years. In the museum there are many other displays of the people who was in the ship during the disaster, theirs lifestyle and many other informations about the ship’s rescue, after such a long time in water.

When Vasa is salvaged in 1961, 600 tones of waterlogged oak is raised into the air, preserving such a large ship is a totally new challenge. Vasa is conserved for 17 years through spraying with polyethylene glycol , PEG, replaces the water in the cells of the wood preventing from shrinking and cracking. After conservation, Vasa dries for another 9 years! 500 tones of water evaporates away!

The video telling us stories about Vasa, about how to salvage, how to preserve Vasa for another generations.

I left the museum after almost three hours wandering around, up and down the floors to admire the beauty of the warship from different angles. To be honest, I was very impressed when seeing such a huge beauty after more than 300 years in the water, now still very alive in my eyes.

But the question – will Vasa survive for another 100 years? In a dark, cold room, without oxygen Vasa could be preserved forever but…with light, oxygen, heat, moisture all materials break down, the conservation only delays aging and prevents new damage. Many different research projects are currently under way to provide a better understanding of the chemical and biological processes in Vasa’s wood, but so far no one know how long Vasa will survive!